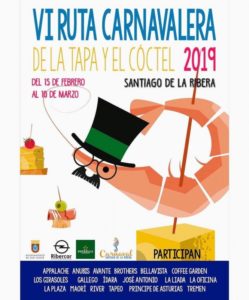 17 different establishments are participating in the annual pre-Carnival tapas route in Santiago de la Ribera (San Javier), offering tapa and a drink for 2.50 euros or cocktails for 3 euros.

These tapas routes are a fun way to not only sample a variety of typical local tapa, but are also an entertaining method of finding new places to eat which are often tucked away down a back street.

The beauty of these routes is that there is no time pressure, so those participating in the route, known as «taperos», can visit as few or as many establishments as they want to, starting and stopping whenever it suits them, and spreading out their tapas sampling over as many days as they choose. It’s obviously fun to participate with a couple of friends so that the best tapas can be debated and selected with several opinions taken into consideration, but equally satisfying with an enthusiastic «better half» who can be persuaded to drive!

This route follows the standard format of a tapas route: Participants pick up their route map from either the tourist information offices in San Javier and Santiago de la Ribera or participating establishments, showing the participating locations and the tapa they offer. Armed with the map, “taperos” select the tapa they would like to try, then set off and find the establishment, order the tapa and ask for the route card to be stamped as proof of purchase.

Participants can vote for the three best tapa and best cocktail as well as the one which was considered to be the least enjoyable, then enter their route card into a prize draw which will take place at the end of the route.Only cards which have obtained 12 stamps will be entered into the prize draw, although anyone can vote.

Voting cards should be deposited in the urns located in the Oficina de Turismo de Santiago de la Ribera and in the festival marquee itself, with the prize draw taking place after the main carnival procession in the fiesta marquee on the Explanada Barnuevo on 10th March.

There are a number of prizes including overnight breaks, meals, wine and other prizes contributed by the sponsors.

This website uses cookies to improve your experience while you navigate through the website. Out of these, the cookies that are categorized as necessary are stored on your browser as they are essential for the working of basic functionalities of the website. We also use third-party cookies that help us analyze and understand how you use this website. These cookies will be stored in your browser only with your consent. You also have the option to opt-out of these cookies. But opting out of some of these cookies may affect your browsing experience.
Necessary Siempre activado
Necessary cookies are absolutely essential for the website to function properly. This category only includes cookies that ensures basic functionalities and security features of the website. These cookies do not store any personal information.
Non-necessary
Any cookies that may not be particularly necessary for the website to function and is used specifically to collect user personal data via analytics, ads, other embedded contents are termed as non-necessary cookies. It is mandatory to procure user consent prior to running these cookies on your website.
GUARDAR Y ACEPTAR